A new article in the Fathom Journal by Dr. David Stone,  Emeritus Professor of Pediatric Epidemiology at the University of Glasgow, methodically takes apart the continuous allegations of the Lancet that Israeli actions has caused sub-par medical care in the territories. Excerpts:


The incendiary claim that Israel has deliberately damaged the health of the Palestinians of the West Bank and Gaza Strip is not evidence-based, argues Dr. David Stone. In fact, the opposite is true: the health of the Palestinians has improved steadily since 1967. Stone maps a cluster of changes – in demography, crude death rates, life expectancy, infant mortality, as well as maternal, perinatal, under-five mortality, immunisation coverage, nutrition and infant growth patterns, primary and secondary health care, and the Israeli influence on ‘the causes of the causes’ of ill health (housing, water, education, employment) – to show that Israeli policies have brought about measurable improvements in Palestinian health and welfare. This was achieved, in the face of formidable obstacles, by a variety of means including an outstanding child immunization programme, the launching of need-responsive innovations in primary care (crucially including maternal and child health services), a large hospital development programme, collaborative modes of working with Palestinian professionals, UNRWA and NGOs, and – arguably even more important – providing high quality training for doctors, nurses and other health providers in Israeli institutions thereby bringing modern standards to anaesthesia, renal dialysis, cardiac surgery and many other critically important fields.


A recurrent assertion is that Israel deliberately impeded or neglected the healthcare system, basic infrastructure and economic development during the period of its administration of WB/G between 1967 and 1994.

Among the claimed adverse effects of these (alleged) policies are counted the substantial and widening gaps between the health of Israelis (or at least Israeli Jews) and Palestinians living in WB/G during and even beyond the period of Israeli rule. In recent years, this narrative, once virtually confined to Palestinian and Arab sources, has been endorsed, reiterated and elaborated by several respected international UK-based medical journals, most notably The Lancet.

Here is just a small sample of the accusations:

Between 1967 and 1993, health services for Palestinians in the occupied Palestinian territory were neglected and starved of funds by the Israeli military administration, with shortages of staff, hospital beds, medications, and essential and specialised services, forcing Palestinians to depend on health services in Israel. (Rita Giacaman et al, Lancet 2009.)

The people of the Palestinian territory matter, most importantly, because their lives and communities are continuing to experience an occupation that has produced chronic de-development for nearly 4 million people over many decades. (Richard Horton, Lancet, 2009.)

Following the June war of 1967, Israel was required by international law to assume responsibility for health services in the newly occupied West Bank and Gaza. Between then and 1993, health services in the occupied Palestinian territory were starved of funds and there were shortages of staff, hospital beds, medication and essential specialised services, while responsibility for healthcare passed from the Israeli Ministry of Health to the military government and then to the Israeli Civil Administration, under the Ministry of Defence. During that time, Israel aimed only to maintain standards of public health and did not attempt to build services beyond primary care. (Aimee Shalan, Spectator, 2013.) 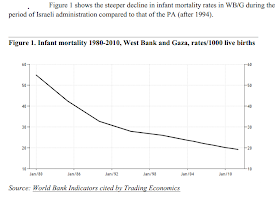 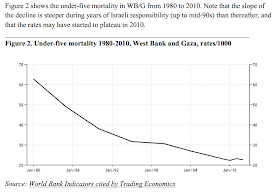 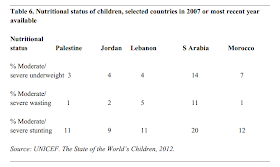 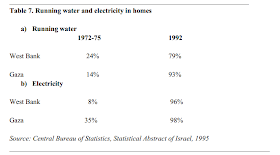 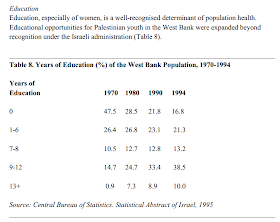 The evidence presented in this paper overwhelmingly points to a clear answer to the question posed in the title – Israel has not damaged Palestinian health. In fact, the opposite is the case. Israeli policies were carefully formulated to improve health conditions in WB/G as rapidly as possible. These policies were carried through to implementation on the ground and brought about measurable improvements in Palestinian health and welfare....The data presented here, for all their shortcomings, permit the following six conclusions to be drawn:


1. Palestinians residing in WB/G generally suffer poorer health than their Israeli neighbours but enjoy better health than many Arab states.

2. Since 1967, following the cessation of hostilities between Israel and several Arab states and the establishment of an Israeli civil administration in WB/G, the health of Palestinians improved markedly.

3. 3. Given the low baseline, especially in Gaza, which suffered serious Egyptian neglect from 1948 to 1967, improvements in Palestinian health and healthcare could not have occurred by chance but were a consequence of health-promoting Israeli policies and activities closely coordinated with local and international partners, including UNRWA.

4. Subsequent to the assumption of full responsibility for health by the PA in 1994 in the context of the Oslo Accords, many of the public health initiatives undertaken by Israel since 1967 were continued

5. Despite the overwhelming evidence to the contrary, many of Israel’s critics – including distinguished doctors, scientists, politicians and NGO officials – continue to lay most or all of the blame for contemporary Palestinian health problems and related disadvantages exclusively or predominantly at the door of Israel and the occupation.

6. The politicisation of health by Israel’s enemies is not a new phenomenon. It is manifested in UN agencies, the media, medical journals, academic conferences and research reports published by humanitarian or medical NGOs purporting to promote universal human rights.

Three examples of the politicisation in the health arena are especially egregious.

First, the banishment of Israel into a separate ‘Committee B’ of the World Health Organisation’s Eastern Mediterranean Region in 1951, at the behest of the Arab League, was a cynical move designed to isolate Israel further from her immediate neighbours. (In exasperation, Israel eventually accepted membership, despite its obvious geographical absurdity, into the European Region of WHO).

Second, for over half a century of the International Federation of Red Cross and Red Crescent Societies refused either to admit Israel to its ranks or to recognise her Magen David Adom (Red Star of David) as the symbol of its emergency medicine organisation. This policy was justified on the spurious grounds that the Star of David was a ‘religious’ symbol – despite the Christian Red Cross and Muslim Red Crescent being granted recognition without challenge.

Third, several medical NGOs have exploited the ‘double halo effect’ (humanitarianism plus health) to attack Israel unfairly for its allegedly health-destructive behaviour towards the Palestinians. Many of these NGOs launched a campaign of Boycott, Divestment and Sanctions (BDS) against Israel at a notorious anti-racism conference held in Durban, South Africa in 2001, at which Israel was denounced as an allegedly ‘apartheid state’ and anti-Semitism was openly on display. The Lancet’s relentless pillorying of Israel, in the guise of promoting Palestinian health and welfare, resonates strongly with the Durban strategy and should be viewed in the light of that unsavoury enterprise.