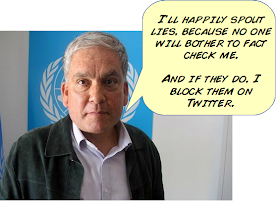 Chris Gunness of UNRWA writes another deceptive piece, this time in the Jerusalem Post, meant to do one thing and one thing only: to maintain UNRWA's funding in the face of increasingly sharper critiques of the agency.

Let's go through it:

As a neutral UN human development agency, UNRWA is ...


"Neutral"??? Neutral between which two poles - Fatah and Hamas? Because UNRWA is certainly not neutral when it comes to Israel. It has taught generations of children that they will return to Israel by force. As I have noted before, this started in the 1950s as UNRWA children exercised to the chant of a-w-d-a, or "return."

A UNRWA principal in 1961 described his school's curriculum to journalist Martha Gellhorn:


In our school, we teach the children from their first year about their country and how it was stolen from them. I tell my son of seven. You will see: one day a man of eighty and a child so high, all, all will go home with arms in their hands and take back their country by force.


And this is still being taught today. A poem from a 2011 UNRWA fifth grade textbook:

There is nothing neutral about teaching children that they will conquer Israel with jihad.

Also, UNRWA is not a development agency. It used to be, back in the 1950s, but the main jobs UNRWA manages to find for Palestinians nowadays is in UNRWA itself. It is not teaching self-sufficiency, it is teaching permanent welfare.

UNRWA welcomes legitimate discussions, as well as critical reviews, with our many stakeholders, including members of the media – such as The Jerusalem Post – but also with our largest donors, as well as host governments, refugee communities and the Israeli authorities.

Is this why Gunness called to boycott the Jerusalem Post?

Is this why Gunness has blocked me on Twitter, even though over the years the things I have revealed have been consistently covered up by UNRWA - proving that my criticisms were correct?

While there is much praise for UNRWA and the courage of our staff, we also face criticism that we are partisan or carry an agenda contrary to the interests of some stakeholders.

That these allegations are made by parties on both sides of the conflict – who also routinely express support – is surely indicative of the effectiveness of our efforts on neutrality.

I hope that UNRWA doesn't try to teach logic to its students.

It has been our consistent practice to address these criticisms as factually and appropriately as possible.

Actually not. It has been their practice to obfuscate their actions to the West while maintaining almost no transparency in terms of its true curricula or detailed budget.

One such criticism focuses on the notion that UNRWA in some sense endorses extremism.

This is an accusation we reject in the strongest possible terms. During the latest Gaza hostilities, it was UNRWA that came out proactively condemning militant groups that had placed rockets in our schools and which we had discovered during our own neutrality inspections.

I for one never claimed that UNRWA is fully aligned with Hamas, in fact I've reported a number of times where Hamas complained about UNRWA actions. That doesn't mean that UNRWA doesn't teach its students about jihad and martyrdom, as I have demonstrated using their own words.

Of course, UNRWA never addressed my criticism, contrary to what Gunness claims. They just hid the evidence without any indication that things have changed.

I would submit that jihad and martyrdom are extremist concepts. UNRWA cannot answer without admitting that either they used to teach it, or that they still do, and that's why they try to ignore me.

There is a related argument that UNRWA is in some sense anti-Israel. This is a notion we reject as groundless.

From the UNRWA "human rights" website: "the Zionist movement has been working day and night on the theft of Palestinian land." Nah, that's not anti-Israel.

Not to mention the antisemitism I found, where UNRWA said that Jews have no concept of human rights or that they were dirty.

Once again, the facts are quite different from what Gunness tells the world.

It is also alleged that UNRWA ... somehow intentionally perpetuates the problem through the generations, unlike UNHCR, which, as our critics would have it, has a mandate to resettle refugees and never registers through generations. This is erroneous.....UNHCR also registers children of refugees as refugees where their political plight remains unresolved.

I showed the truth about this in much more detail recently. Gunness no doubt read that and tries to pretend that UNHCR children who received refugee benefits under family unity provisions are considered refugees themselves, and I show using UNHCR documentation that he is not telling thew truth. Again.

Gunness and other UNRWA flacks think that they can keep fooling people with their doubletalk, deceptions and lies. But the truth comes out. Facts matter. And I am still waiting for a UNRWA official to step up and address my facts in an honest way.