From Jane's, data from the IDF: 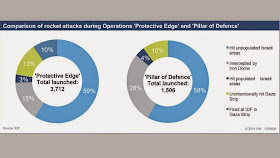 The accompanying article brings up some interesting points, but here's what I found interesting from these two graphs.

Probably because there was a ground war, terror groups fired their rockets directly at the IDF in Gaza - about 370 of them.

The rockets are not meant to be used that way. This means terrorists are aiming the rockets to hit IDF targets by pure guesswork, not the educated guesses they have used for the shorter-range rockets aimed at Sderot and Ashkelon. It would mean that they are aiming the rocket launchers very low - at a height that would hit Gaza buildings when they miss their targets.

This means that over 850 terrorist rockets landed in Gaza during the fighting so far.

(I am assuming that "rocket" means rocket, not mortar. But even their mortars would be launched from a far enough distance that most would miss their targets and land in the built-up areas that the IDF was engaged in.)

The number of deaths from these rockets cannot be negligible. The amount of damage must be significant.

Given that the misfired rockets are landing wildly all over Gaza, the media is especially negligent not to mention these rockets are possible sources for damage and deaths.

Hell, the media never even mentioned the fact that Gazans were firing rockets at the IDF to begin with!

(Add to that the new story that Hamas may have executed dozens of tunnel diggers on suspicion of being "collaborators." )