From The Independent and Business Insider:

Fears are growing that the Gaza conflict could transfer to the streets of France after Jewish-owned shops were burned and pillaged last night during a second violent pro-Palestinian demo in the space of two days.

In the Paris suburb sometimes nicknamed "little Jerusalem" for its large community of Sephardic Jews, the rally descended into chaos when dozens of youth -- some masked -- set fire to bins and lit firecrackers and smoke bombs.

Eighteen people were arrested after looters wrecked shops, including a kosher foodstore and a funeral home as protesters shouted: "Fuck Israel!".

A pro-Gaza demonstration in a town with a large Jewish population began peacefully but degenerated into attacks on Jewish and Chaldean businesses and four hours of running battles between youths and police.

Several cars were burned. Three shops, including a Kosher grocery, were burned and pillaged. A railway station was severely damaged.

The interior minister, Bernard Cazeneve said today: “When you menace synagogues and when you burn a grocery because it is Jewish-owned, you are committing anti-semitic acts… That is intolerable. Protest against Israel is legitimate. Nothing can justify such violence.” 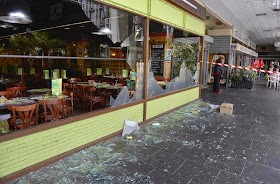 The riot in Sarcelles - which was for many years run by disgraced French politician, Dominique Strauss-Kahn – followed violent scenes during a pro-Palestinian demonstration in northern Paris on Saturday afternoon.

Thirty people were arrested and 18 policemen slightly injured when youths pelted police lines with stones and bottles. Another 18 youths were arrested in Sarcelles last night.

The Prime Minister, Manuel Valls, warned at the weekend that France faced “a new form of anti-semitism”, fomented by the hard left and by political activists like the comedian Dieudonne who blame “Jews” for all the world’s ills.

"We have never seen such an outpouring of hatred and violence in Sarcelles," said the mayor Francois Pupponi. "This morning people are stunned, and the Jewish community is afraid."

Roger Cuikerman, head of the French umbrella groups of Jewish organisations, CRIF, said there was a growing anxiety amongst French jews. Protest against Israeli government actions was one thing, he said. Attacks on Jews for being Jews were “deeply disturbing”.

“They are not screaming 'death to the Israelis' on the streets of Paris,” he said. “They are screaming ‘death to the Jews’. They are attacking synagogues which are places of prayer.”

It was only last week that Israel haters at Mondoweiss pretended that a group of these gangs attacking a synagogue were not antisemitic - because they found some video of some Jews fighting back, which is unnatural and very disturbing to those who prefer their Jews to die like sheep to a slaughter. (Here's the truth.)

The other reason that the moral midgets at Mondoweiss hate stories like these is because is shows that a Jewish state is necessary, as hundreds of French Jews who moved to Israel last week proved. That drives them nuts because they base their anti-Israel arguments on the claim that antisemitism is a thing of the past.

(Etymology note: I've seen definitions of pogrom both for organized massacres against people and against property. I am using only the latter definition. Thank God.)
Elder of Ziyon at Monday, July 21, 2014
‹
›
Home
View web version