The headline says it all: 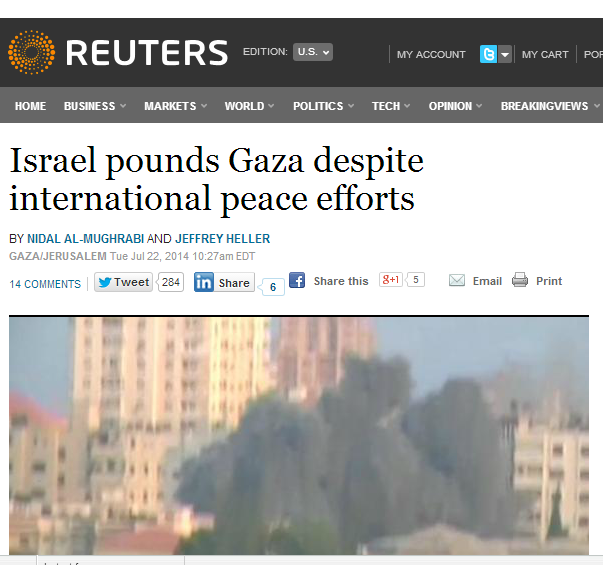 But it doesn't get any better:

(Reuters) - Israel pounded targets across the Gaza Strip on Tuesday, saying no ceasefire was near as top U.S. and U.N. diplomats pursued talks on halting fighting that has claimed more than 600 lives.

..."A ceasefire is not near," said Justice Minister Tzipi Livni, viewed as the most dovish member of Israeli Prime Minister Benjamin Netanyahu's inner security cabinet.

"I see no light at the end of the tunnel," she told Israel's Army Radio.

"There is a framework ... to end the violence and that framework is the Egyptian initiative," Kerry said at a joint news conference with Shukri.

"For the sake of thousands of innocent families whose lives have been shaken and destroyed by this conflict, on all sides, we hope we can get there as soon as possible," he said.

The Reuters dispatch does not say a word about Israel accepting the Egyptian framework for a ceasefire, and Hamas rejecting it. And while it does mention Hamas rockets, in no way are they characterized as somehow being against the concept of a ceasefire.

The entire article is meant to give the exact opposite impression from the truth.

Not surprisingly, one of the reporters is Noah Browning (@SheikhNB on Twitter), who I have shown to be a liar more than once.

And this is the most pervasive source of news in the world.
Elder of Ziyon at Tuesday, July 22, 2014
‹
›
Home
View web version