One of those dead "civilians"

We have noted that the UN relies on three "human rights" NGOs - B'Tselem, PCHR and Al Mezan -  to determine which of the people killed in Gaza are civilian and which are members of armed groups.

And we've shown that B'Tselem's methods in determining who is a "civilian" are laughable.

Hamas has been trying to hide the number of terrorists killed (as I said they would at the outset of the war.) But sometimes there are mistakes.


At approximately 11:55 (Friday), an Israeli drone fired a missile at a number of Palestinian civilians in al-Zanna area in Bani Suhaila village. As a result, 2 civilians were killed: Mohammed Khalil al-Buraim, 25; and Mohammed Suleiman Hussein Sammour, 45.  Four civilians were also wounded.: 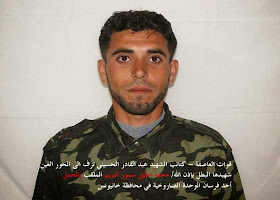 Mohammed Khalil Samour al-Buraim, meanwhile, is being celebrated as a mujahid by the Abdel-Qader al-Husseini Brigades Storm Troopers. He was apparently a rocket launcher.

The UN's very flawed statistics get disseminated to the media and are never questioned.

Because more reporters are lazy and reflexively anti-Israel. Most European politicians that receive the statistics are predisposed to believing that Israel is targeting civilians.

So no one outside of us Zionists bother to do the research. And, of course, we are unreliable by definition, no matter how many times we have proven to be right.