On Thursday, over 150 Gaza rockets fell in Gaza. How many people did they kill?

The Gaza NGO Safety Office counts rockets fired from Gaza towards Israel. They have been sending out updates every two hours or so during daytime. 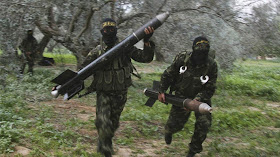 On Thursday, they counted:

Although some of the time periods are missing, this adds up to at least 340 rockets shot from Gaza in one day.

According to the IDF, which doesn't have any incentive to downplay the number of rocket attacks, only 185 rockets crossed the Green Line of which 44 were intercepted by Iron Dome. (The IDF only counted 192 total rockets, meaning only 7 falling in Gaza, but GANSO is on the ground in Gaza and this failure rate is far more in line with historical trends than only 4%. Chances are that the IDF is simply not prioritizing counting rockets that don't make it into Israel.)

If these numbers are accurate, then over 150 rockets that were fired from Gaza either exploded on the ground or fell short.

Given the number of deaths and injuries this year already in Gaza from rocket misfires when they were being fired at a much lower rate, it is a reasonable assumption that many of the civilians who are dying in Gaza are being killed by terrorist rockets.

It is a certainty that none of them will be reported as such by the Gaza media or medical authorities.

UPDATE: The IDF tweeted this:

A rocket fired from Gaza today fell short and crashed into UNRWA warehouses. Now there is a massive fire. pic.twitter.com/wHmMIuzATQ
— IDF (@IDFSpokesperson) July 12, 2014