The Seforim Blog had a fascinating article last year about the illustrations in old Haggadahs.

One is that the maror, or bitter herb, was identified as an artichoke in some ancient illuminated Haggadahs:


But this part is mind-blowing. Quote:
Setting aside the issue of what marror is, another custom related to marror can be found in both printed and manuscript haggadot. In the Prague, 1526, the first illustrated printed haggadah, there is a picture of a man pointing at his wife with the legend, “there is a custom that a man points to his wife when mentioning marror based upon the verse Ecclesiastes 7:26 “Now I find woman more bitter than death.” 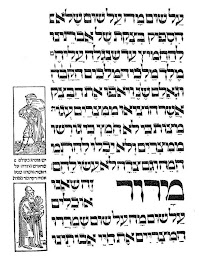 A.Y. Hyman the scholar of Jewish liturgy was appalled when he came across this. In his autobiography, he claims that there is no basis whatsoever for this “custom.” Hyman is wrong.[5] If you look at the Brother to the Rylands Haggadah you can see that it shows this custom. As does the Washington Haggadah. 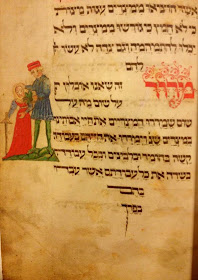 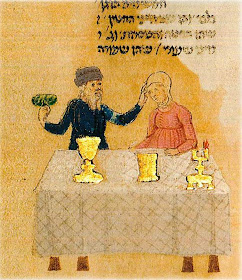 It’s worth noting that the Rothschild Miscellany shows another custom at the time, mid-14th century, that of mixed dancing. 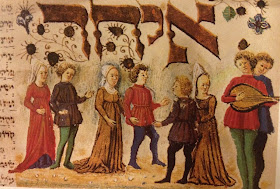 The mixed dancing is that of couples, husband and wives dancing with each other, and not that of unmarried men and women dancing[6] In Italy, where this manuscript was composed, mixed dancing was apparently common during this period.[7]

Returning to the gesturing at one’s wife at marror, in the Hiluq and Biluq Haggadah this custom takes on a somewhat more humorous dialogue with the wife no longer passive but instead returns the compliment. In that haggadah it includes speech balloons and they record the following: The husband states “touching marror I must recall that this one, too is bitter [as gall].” To which the wife replies, “It is you [my husband] is one of the causes of bitterness as well.” After which, we have a play on the 13 attributes of Rabbi Yishmael and the haggadah provides that “the third comes between them [perhaps the marror itself] and makes a stink” - or in Hebrew ve-yavo ha-shlishei ve-yakhriach benehem.[8] 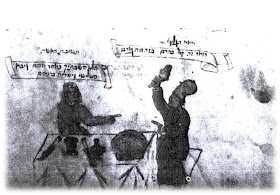 It is a really great read, and the comments (questioning the artichoke issue, for example) are illuminating as well (pardon the pun.)