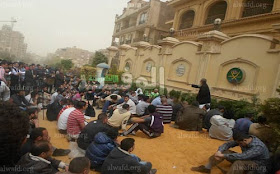 Noting the anti-Brotherhood protests in recent days, Muhammed blamed the Jews, saying the Jews are behind the strife in Egypt, and he called for the Muslim masses not to respond to this "sedition" which would allow Jews to overthrow Egypt.

He also attacked the media and Iran for encouraging the protests and attempting to overthrow the regime.

I'm not sure if this means that the Shiites and media are Jewish or if we are just conspiring together. Maybe next week he'll explain further.