The BBC's idea of a hero: 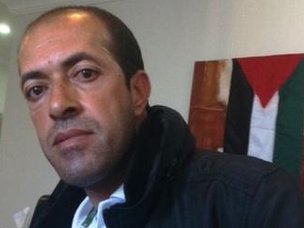 A two-bed flat not far from the cornice in Qatar's capital, Doha, is now home for 47-year-old Ibrahim Shammasina from Ramallah.

His new living room is twice as large as the cell in the Israeli jail where he spent 19 years.

"A minute of freedom is worth more than all the possessions in the world," says Shammasina. "Prison, it's a grave - as if you're in a grave but still alive."

Shammasina was sentenced to 23 years in jail for his role in the 1990 murder of three Israelis and a further 20 years for planning a kidnapping. Despite spending almost half his life in prison, he does not regret his actions.

"When there is an occupation, you're forced to," he says. "It's your duty, the duty of every Palestinian, to resist the occupation. If I didn't resist, I would just have surrendered."

Out of one of the bedrooms steps Ibrahim's frail 85-year-old mother, Tamam. While he was in prison, Ibrahim's brother, father and wife all died.

His mother, who peppers every sentence by giving thanks to God, could not see her son for years.

Understandably, she has now decided to come to Qatar to be with him.

Despite the time they spent apart, she supports what he did.

Also visiting Shammasina for a few weeks is one of his two sons, 24-year-old Iyad.

His father has been in prison for most of his life, but he says that he does not feel any anger towards him, although they do not have a typical relationship.

"He's more my friend than my dad," says Iyad.

The BBC allows Shammasina to talk about how horrible prison is, how wonderful freedom is, and how important resistance is. It describes how heartbroken his mother is, how he is trying to rebuild his family, and how tragic it is that his brother, father and wife all died while he was imprisoned. The entire is designed to make the reader sympathize with him and with the tribulations he has had to endure.

But it doesn't say a word about his victims.

Lior Tubul and Ronen Karmani, were both seventeen years old (some reports say Ronen was 18.) On a summer day in 1990, they went to visit their girlfriends north of Jerusalem.

Shammasina abducted them, bound their hands behind their backs, gagged them and then stabbed them dozens of times, so that their faces were unrecognizable. They were dumped in a ravine nearby.

This subhuman scum was also involved in murdering a taxi driver, Rafi Doron, as well as abducting and killing a hitchhiking soldier, Yehoshua Friedberg.

This happened during that non-violent first intifada we hear so much about.

This is the monster - and child-killer - that the BBC is asking its readers to sympathize with.