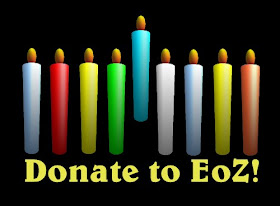 This has been an amazing year for the blog, and it is all thanks to you for reading, Tweeting, Like-ing on Facebook, +1-ing on Google, linking and emailing the posts you liked.

This year the blog broke out of the mold of most websites and went in some new directions. It is no longer a blog - it is a one-person multimedia empire:


Although I am not great at self-promotion, somehow EoZ keeps gaining fans.

This year I've been quoted and linked to by journalists, pundits and news sources like Roger L. Simon, Melanie Phillips, CAMERA, Fox News NY, Israel Today, Honest Reporting, the GLORIA Center, the Algemeiner Journal, PJ Media, Hot Air, The Propagandist, The Jerusalem Post, The Philadelphia Jewish Voice, Commentary, The Spectator (UK), and The National Interest as well as numerous mentions in Memeorandum. (Not to mention the memorable time that the anti-Zionist +972mag thought they could ridicule me - when the joke was on them.)

A book due out early next year actually thanks me by my blog name, which may be the first time an anonymous blogger is acknowledged in a book!

Technorati, using its opaque algorithm, ranks this blog at the moment as #3 out of of all 16,000 World Politics Blogs they follow, and it is #31 out of 15,000 Politics blogs. Not bad for a one-person operation!

My Twitter followers have been steadily increasing, now at over 1850. About 2000 subscribe to the blog via SMS or email. Not huge, but growing, with more and more of my hits coming from social networking sites.

By the end of the year I will have gotten 1.7 million page views.

As you can imagine, I spend thousands of hours on these activities. And I have some plans for 2012 as well.

If you believe that all of this is worthwhile, please consider donating. Due to a boneheaded move on my part I lost my Google AdSense revenue and as I said I had made a little from writing for a website that no longer exists, so right now asking for money is the main way for me to get a little bit back for the huge amount of time I spend. I do not like asking for money, believe me.

You can donate by clicking on one of these two buttons:

If you dislike PayPal, you can send me an Amazon gift card instead.

Thanks so much for all your support and the very kind compliments, and have a (choose appropriate wish for your circumstance) wonderful Chanukah, a Merry Christmas, a happy Kwanzaa, a joyous winter solstice, a tremendous Festivus and a Happy New Year!
Elder of Ziyon at Thursday, December 22, 2011
‹
›
Home
View web version