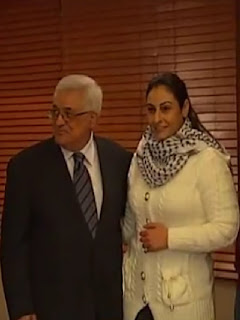 Muna, who was freed to Turkey during the first stage of the Gilad Shalit prisoner exchange swap with Hamas, was serving a life sentence for her part in the murder of Ofir Rahum, an Israeli teen from Ashkelon.

On Wednesday Israel Radio reported that Abbas had met Muna in private during his visit to Turkey after holding a group meeting with the rest of the Palestinians deported to Turkey in the Shalit deal.

In response to Abbas' meeting, the Prime Minister's Office released a statement later Wednesday, saying that it was "shocking to see the man who claims to the whole world that he aims for peace with Israel, going as far as Turkey to meet a despicable murderer."


Ha'aretz apparently doesn't think the details of Ofir Rahum's murder, and Amna Muna's role in it, is important enough to mention.

Here's the story, from Wikipedia:

Mona Awana, who was later arrested by the Israeli police, said she decided the day the Palestinians carried out the lynching of two Israelis soldiers in Ramallah in late 2000 to abduct an Israeli and murder him. Mona had been present at the Ramallah lynching, and said she was "excited" by what she saw. Soon after, Mona started to make contact with Israelis on the Internet. Awana contacted several Israeli teenagers via chat rooms. Then she targeted Rahum with whom she pretended to start an online romance. In conversations over several months Mona pressed for one thing — a meeting in Jerusalem. When Rahum suggested a venue closer to his home, she said she couldn't get a car. When he said his parents would object, she promised to get him back by 5. That vow and a few sexual innuendos persuaded the boy. "You don't know how much I am waiting for Wednesday," Mona wrote him two days before. When he came to meet her, she convinced him to escort her to Ramallah.

Awana then drove him toward Ramallah. Somewhere on the way, according to Palestinian eye-witnesses interviewed by a French news agency, at a prearranged location, she bolted from the car, another vehicle drove up and three Palestinian gunmen inside shot Ofir more than 15 times. One terrorist drove off with Ofir's body and dumped it, while the others fled in the second vehicle.

This was not a simple murder. It was a coldblooded, vicious murder of an innocent teenage boy whose only crime was being an Israeli Jew.

That makes her a heroine to the leader of the "moderate" Palestinian Authority.

Abbas didn't just meet her as part of a crowd of ex-prisoners. He showed his honor and respect for the child killer by meeting her in private! (The entire video is proudly displayed on Abbas' YouTube channel.) 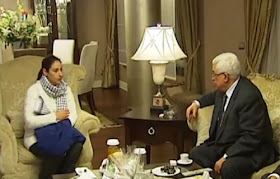 This is not surprising, of course - Abbas had traveled to Lebanon to meet with another vicious child-killer, Samir Kuntar.

It seems to be a pattern.

But, if you are the UN or EU, make sure you don't embarrass him by criticizing him. Arabs cannot handle criticism like that. It shames them. And then when they are shamed they become less moderate. And it would be your fault.

So treat someone who praises and lionizes child-murderers with respect - peace depends on it.
Elder of Ziyon at Wednesday, December 21, 2011
‹
›
Home
View web version