Palestinian Arabs to complain about Hurva at Arab Summit

At the Arab Summit to be held in Libya this weekend, the Palestinian Arab delegation will present a report detailing their complaints about Jews rebuilding the Hurva synagogue.

The first issue is that they still believe that the discredited prophecy attributed to the Vilna Gaon associating the Hurva reconstruction with the building of the Third Temple on March 16th is guiding Israeli policy.

Their second problem is that the Hurva is to be administered, they say, by the Western Wall Heritage Foundation, thus tying Hurva to the Temple Mount.

The third issue is that the "so-called" Jewish Quarter never existed and the Hurva was built on top of a Muslim neighborhood.

They claim that the Hurva is "tens of meters" from the Al Aqsa Mosque.

Finally, they complain about the intolerable fact that the Hurva dome, at 24 meters, appears to be higher than the Dome of the Rock and is meant to hide the Temple Mount and make the Hurva appear more prominent from many angles.

Incidentally, the best pictures of the Hurva come from Muslim sites complaining about it. 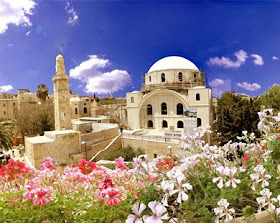