The following images show the brutality of the Israeli occupation of Palestinian women:

Even the article admits that the violence was started by the protesters, not by the IDF. Even so, it claims that the soldiers were cruelly assaulting PalArab women.

Here are three of the supposedly damning pictures showing what appears to be an assault of an innocent, unarmed woman: 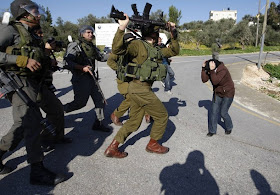 Look at the poor Arab woman , cowering as she is apparently about to be hit by the callous IDF soldier with his machine gun! Looks pretty bad, right?

And here she is seemingly being assaulted by the same soldier: 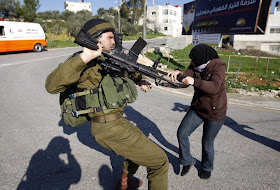 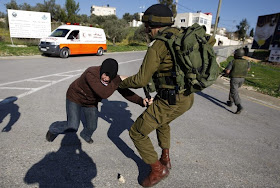 But if you look closely, things are not as they seem.

The pictures are being shown out of sequence: the Arab woman, knowing that IDF soldiers aren't going to fire at her, tries to grab the machine gun out of the soldier's hands (picture 3, machine gun mostly obscured but you can see the strap), manages to turn the soldier around while holding on to the strap of the machine gun as he tries to pull it away (picture 2) and then the first picture shows him after he managed to wrest it away, while other soldiers come to help him out!

It turns out that these photos were snapped by Reuters, and the caption of photo #3 is "A Palestinian woman tries to grab the weapon of an Israeli soldier in the West Bank village of Nabi Salih, near Ramallah, January 22, 2010. " For some reason, they didn't caption photo #2 the same way, and they botch the caption of photo #1 as if the IDF soldier is about to assault her, even as they add "The woman ran away unhurt."

A woman violently tried to grab a soldier's machine gun and was not even arrested.

Rather than showing IDF cruelty, these pictures show almost superhuman restraint on the part of IDF forces as they are being physically assaulted by women who know very well that they are not going to be badly hurt. Like these: 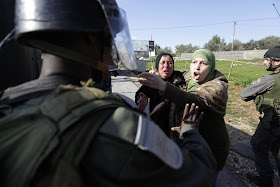 This next picture, almost unbelievably, shows a woman grabbing at the face of an IDF soldier. There is nothing defensive about this at all, and it shows how little the protesters have to fear from the soldiers, knowing full well they will not be shot an unlikely to be hurt: 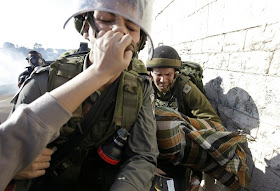 Similarly, this woman appears to be grabbing at the soldier, not holding him off defensively: 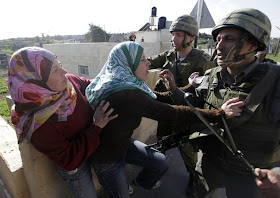 At the same time, the boys are hurling rocks at the soldiers: 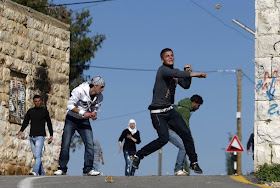 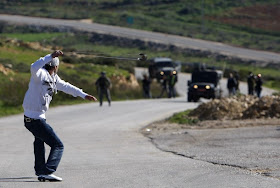 The photos that are meant to show cruelty unintentionally show the opposite - that Palestinian Arab protesters intentionally try to provoke soldiers into losing their cool, especially when there are photographer around.
Elder of Ziyon at Saturday, January 23, 2010
‹
›
Home
View web version