Today's Syrian drought - and the Hauranites

Some 700,000 households in Syria – about 3.5 million people - have no income. In other words, an average of one family of five in Syria leans on monthly governmental aid in order to survive, according to a comprehensive study conducted by the Social Affairs and Labor Ministry in Syria, whose main findings were published by the local al-Watan newspaper.

These reports join a recent international report, which states that some 160 villages in northeastern Syria have been abandoned by their residents due to the food shortage. These villagers immigrate to the country's big cities, putting a great amount of pressure on the already shaky infrastructures in Syrian cities.

This reminds me of what happened in the Hauran district of Syria in the early 1930s. A severe drought there also prompted tens of thousands of Hauranites to leave - and the emigrated to the most logical place to make money, Palestine:

The Hauranite "invasion" was so massive that both Arabs and Jews protested the illegal immigration: (all articles from the Palestine Post) 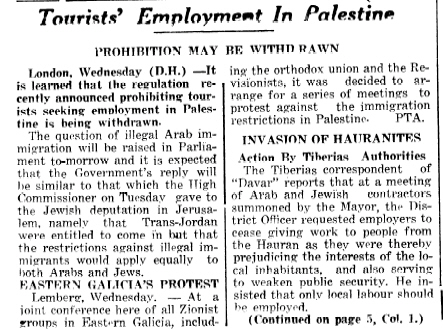 Nonetheless, the Hauranites did find jobs and sent back money to their families:

Palestine in the 1930s was a logical place for Arab immigration, for precisely the same reasons - its economy was the envy of the Middle East. More importantly, Arabs didn't feel a strong attachment to the areas they lived in (outside their villages) - the nascent Arab nationalism that the intelligentsia adapted from the West did not permeate the villages and the peasants, who were itinerant and moved where ever they wanted whenever it made economic sense, corssing "national" boundaries.

Many (although not most) of todays' "Palestinian" Arabs are actually descended from these immigrants from Syria, Iraq and Transjordan. They didn't consider themselves parts of these nations - they simply considered themselves Arab.

When the fighting began after the 1947 partition agreement many of them crossed borders again, thinking that their Arab brethren would allow them to settle in new homes as they had for centuries before when circumstances prompted Arabs to relocate elsewhere in the Middle East. They didn't anticipate that they would become pawns in a power game against Israel for the next six decades and beyond, and that their Arab brothers - and leaders - would do everything possible to keep them stateless.
Elder of Ziyon at Tuesday, June 23, 2009
‹
›
Home
View web version