I just came across this from the Palestine Post of June 30, 1949, describing how hard the new state of Israel tried to accommodate its Muslim citizens - and even its Muslim enemy POWs.

In 1949's Ramadan, Israel went out of its way to give extra rations to Muslims for their break-fast meals, mosques were repaired, special Muslim programs were broadcast on Kol Yisrael, and Muslim POWs were given access to extra food and religious articles.

Notice also that one of the reasons that there was a shortage of sheikhs and imams - because they fled their communities during the war, leaving their followers behind. The story of the hundreds of thousands of Arabs who voluntarily fled in 1948 has still not been adequately written, and this would be an interesting chapter of that book. 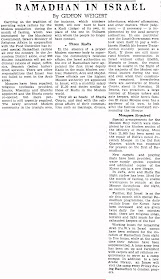