A new book just came out called "Arafat and the Dream of Palestine: An Insider's Account," by Bassam Abu Sharif.

The prologue is available on Amazon and it talks about Arafat's plan crash in the Libyan desert and how Sharif reacted to the news. Sharif speaks reverently about how Arafat heroically handled the crash, taking care of the survivors personally. One detail of the story is very interesting, though: 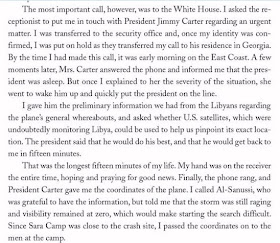 Sharif says that he had to call The White House. He got connected to President Jimmy Carter, who was at his Georgia home, who within 15 minutes found out exactly where Arafat's plane was and communicated the coordinates back to Sharif. Thanks to the quick thinking of Sharif and Carter, Arafat's life was saved.

One small problem is that, according to Sharif, the plane crash occurred on April 8, 1993, over twelve years after Jimmy Carter left office.

If Sharif called ex-President Carter in 1993, is it possible that Carter would still manage to get that information to Sharif in 15 minutes? Is it possible that he could completely circumvent The White House, the State Department, the CIA and everyone else necessary to get satellite intelligence so quickly?

Well, it turns out that Sharif is quite simply a liar. First of all, the crash happened in 1992, not 1993. And according to the New York Times,

In Washington, Bush Administration officials said a feeling of ambivalence about Mr. Arafat's fate led to indecision on whether to use American satellites to try to find the P.L.O. leader's downed plane. A Palestinian official had sought American help through former President Jimmy Carter, but the White House had not reached a decision by the time the plane was found. The State Department insisted it played no role in the rescue, saying: "We did nothing. Nothing."

They lie as naturally as they breathe. And one can assume that this worshipful book about Arafat is as filled with lies as this first anecdote is.
Elder of Ziyon at Thursday, June 25, 2009
‹
›
Home
View web version