Now, this is ironic

YNet reports that Jeff Halper, the moonbat from Israel who sailed on the Free Gaza boat, travelled through the Erez crossing to Israel where he got detained by Israeli police. They are considering charging him with breaking the law.

What is the law they want to charge him with? Incitement? Sedition? Treason?

No, nothing like that. The law that he broke was that Israel has made it illegal for Jewish citizens to enter Gaza.

So here we have a law that is clearly bigoted, as it discriminates against Jews only. Yet it is a law that Jeff Halper would normally support, because otherwise thousands of Gush Katif expellees would be trying to return to their homes.

If Halper is charged and contests the charges, he will be on the side of the settlers who he passionately fights every day, fighting against a law that portions of "Palestine" be Judenrein - his normal, bigoted position. 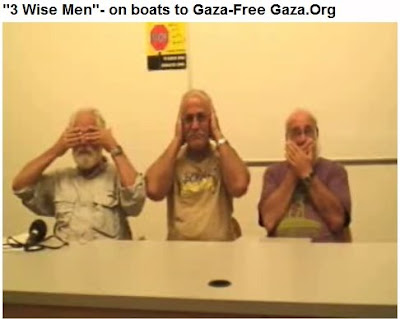 By the way, here is a screenshot from a video of Halper with two other members of the FGM in an amateurish press conference, imitating the monkeys in the famous "see no evil" picture. He's the monkey on the right, in a video ironically called "3 Wise Men."

Listening to their words for half a minute would convince anyone that wisdom is not an attribute that anyone would ascribe to these people.
Elder of Ziyon at Tuesday, August 26, 2008
‹
›
Home
View web version