Since the Israeli press "leaked" a description of what the Olmert government offered them for a state, there has been a steady diet of criticism by Palestinian Arab leaders about the plan saying it is wholly unacceptable. From Erekat to Fayyad to Abbas, all agree that nothing less than 100% of the West Bank and East Jerusalem is acceptable, period, not to mention the phony "right of return." 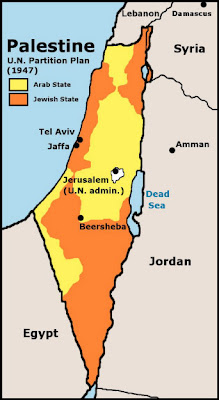 It is useful to compare the continued stonewalling and utter refusal to compromise with another plan that was once offered, the 1947 UN Partition Plan.

In 1947, the UN drew up a plan to divide up Palestine between Arabs and Jews. The Jewish section included three disconnected sections. While the Jewish section was to include some 5500 square miles, most of it was desert. It included no major Jewish historic or biblical sites. Over 40% of its residents would be potentially hostile Arabs. It was utterly indefensible.

Why didn't the Jews at the time reject this plan? Why didn't they demand to include Jerusalem and Hebron and Bethlehem, to make the sections all contiguous, to allow as many Jews as possible to immigrate freely (as a "right of return") to the Arab state?

The answer is obvious. The Jews truly wanted a state. Even a deeply flawed, indefensible, checkerboard solution was better than none at all. The Jews knew that they were in no position to "demand" anything because this was the best they could hope for in a negotiated settlement. The point of Zionism was to have a Jewish state, a safe haven where persecuted Jews worldwide could live in freedom and dignity, and even if it wasn't to include all of their dreams it was still a worthy goal.

The contrast with Palestinian Arab nationalism could not be starker. They don't want a state for their people, they don't want an end to the "refugee" problem, they don't want to build a nation. If they did, they would have been working on it tirelessly in the 15 years since Oslo when they have been enjoying far more autonomy than Jews did in Mandate Palestine. If they wanted a state, they would be building permanent housing to replace "refugee" camps in their territories.

If they did want a state, they would be making counteroffers to Israel rather than reject everything offered outright. They would do everything they could to build even an imperfect state to help their people.

But they don't. They only understand their supposed "rights", but none of the commensurate responsibilities (nor the rights of anyone else.) They care about slogans and honor, but not about their own people. They want the money and the recognition and the headlines but they don't want to work.

Chaim Weizmann once said that the Jews should accept a state even if it was the size of a tablecloth. That is how people who truly yearn for independence act. 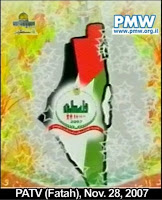 And what the Palestinian Arabs want, from the "extremists" to the "moderates," is not the creation of a state for Palestinian Arabs but the destruction of a state for the Jews. That desire might be dressed up as a temporary compromise for Western consumption but it is as clear as the maps they publish to this day.
Elder of Ziyon at Tuesday, August 19, 2008
‹
›
Home
View web version