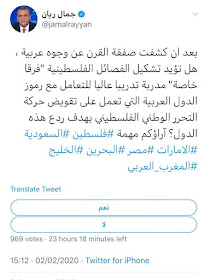 The tweet translated to, "After the century deal revealed Arab faces, do you support the formation of Palestinian factions with special teams highly trained to deal with the symbols of Arab countries that are working to undermine the Palestinian national liberation movement in order to deter these countries? Your opinions are important # Palestine # Saudi Arabia # Emirates # Egypt # Bahrain # Gulf # Maghreb Arab"

His tweet angered social media users and he took it down after receiving over 900 responses in less than an hour for fear of being sued. People demanded Twitter delete his account for calling to assassinate Arab leaders.

Some people responded by saying that it was Qatar who was pro-Israel:

Al Jazeera is often accused of being a mouthpiece for Qatar, whose foreign policy has been more pro-Iran and pro-Muslim Brotherhood than the rest of the Arab world. Qatar also cooperates with Israel in bringing in far more aid to Gaza than all the other Arab countries combined - entire apartment complexes housing thousands have been built under Qatar's sponsorship.