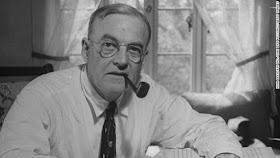 Secretary of State [John Foster] Dulles yesterday corrected the Congressional Record to withdraw a remark he made to the effect that the Prophet Mohammed had been assassinated by a Jew, thereby explaining Saudi Arabian discrimination against Jews. The Secretary also withdrew remarks to the effect that a settlement between Israelis and Arabs was made more difficult by the “bargaining proclivities of both sides.

On February 24, under questioning about American accession to Saudi Arabian refusal to admit American Jewish troops to an American air base in Saudi Arabia, Secretary Dulles told the Senate Foreign Relations Committee that the Saudi Arabians have felt for a long time–it goes back centuries–a very particular animosity toward the Jews, because they credited the assassination of Mohammed to a Jew.” When his advisers, at his elbow, told him that he was wrong about this, Mr. Dulles told the Senate committee that he had been told that he was wrong and that “I will ask leave to correct the record in that respect later on if it proves I made a mistake.” The correction yesterday deleted part of his testimony, which now reads that the Saudi Arabians feel a “very particular animosity toward the Jews, since the time of Mohammed.”

Dulles was a prominent layman of the Presbyterian Church and active in The National Council of the Churches of Christ in the USA before becoming a diplomat. It seems obvious that when he accused Jews of killing Mohammed, he was really thinking about Jews killing the founder of his own religion.

Even though his aides told him during testimony that he was mistaken about Jews killing Mohammed, it took him ten days to correct his statement.

This was hardly the only antisemitic statement Dulles made in his career. For example, on June 18, 1956, he responded to Cardinal Spellman’s comment that “Jewish activities are becoming excessively arrogant and demanding” by saying that this “was one of my problems, that I felt it very important to try to demonstrate that the Jews did not in an election year dictate the foreign policy of the United States.” On February 12, 1957, he “mentioned the terrific control the Jews had over the news media and the barrage which the Jews have built on Congressmen.”

Interestingly, Dulles had a sister who married a Jew from an Orthodox family who committed suicide, and the family convinced her to take back her maiden name rather than keep the Jewish name.