In Human Rights Watch's report on the May fighting in Gaza, by far the most absurd statement is this one: "Human Rights Watch did not find any evidence of a military target at or near the site of the airstrikes, including tunnels or an underground command center under al-Wahda street or buildings nearby."
Wow.
Well, here's some evidence that the "experts" at HRW seem to have missed.
Here is what a tunnel strike looks like, from a different street in Gaza - Aqsa Street. 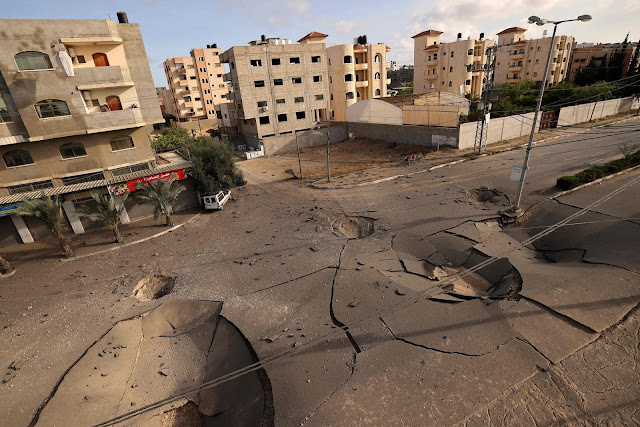 You see three small craters from the Israeli munitions penetrating the street surface. They exploded underground and collapsed the walls of the tunnel, causing the larger craters corresponding to the small ones closer to the camera. The larger craters are exactly what a crater on top of a collapsed tunnel section looks like.Notice there is no shrapnel, no debris - just a collapse. 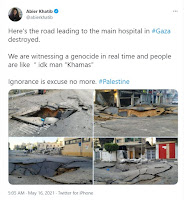 According to Abir Khatib, here are photos from the road that leads to a hospital in Gaza. That is indeed al-Wahda Street, which leads right to the Shifa Hospital where Hamas has had a military headquarters.

This is what a collapsed tunnel looks like from Al-Wahda Street level - just like the ones on Aqsa Street.
If Human Rights Watch doesn't know that this shows that there were tunnels on Al-Wahda Street, then they are grossly incompetent. They cannot be believed about any military matter.
There is more evidence that there were tunnels beneath Al Wahda that eluded HRW. From the Wall Street Journal, May 26:

Azzam Al-Kolak [Qowlaq], 42, lived on the top floor of a three-story building that caved in. He said he escaped with his wife and children through his kitchen, which suddenly was on the ground level. He said engineers who visited the site told him the building dropped some 40 feet below street level. “It felt like I was being sucked into the ground,” said Mr. Al-Kolak.

How can a building fall 40 feet below street level unless there is a huge empty cavern underneath it? Indeed, the collapse of Mr. Kolak's building isn't evidence of IDF crimes, as HRW would interpret it, but evidence that some Hamas tunnels or bunkers extended directly underneath residential buildings - which is most definitely a war crime!
This is solid evidence that there were tunnels under al-Wahda Street. More importantly, it is solid evidence that Human Rights Watch researchers are partisan hacks who cannot properly analyze any military forensics.
(h/t Lenny Ben David/JCPA)