Emgage is a moderate American Muslim group that "seeks to educate, engage and empower Muslim American communities through educational events, voter initiatives, and leadership development for the purpose of creating a community of equitable, knowledgeable, and motivated citizens."
Joe Biden's Muslim American outreach advisor is a member of Emgage, and it seems to have raised its profile significantly during the Biden campaign.
The pro-terror extremists at Electronic Intifada are very upset - because Emgage is not rabidly anti-Israel.
Ali Abunimah goes through his usual attempts of smearing by association as he ticks off the supposed offenses of Emgage's leadership. For example, members of Emgage attended the Muslim Leadership Initiative, sponsored by the Shalom Hartman Institute in Israel, to give thinking Muslim American professionals information about Israel. Abunimah and BDSers absolutely hate MLI because it shows that normal Muslims are not necessarily the BDS drones that Israel-haters want the world to believe. So Abunimah tries to smear MLI by saying

MLI is managed by Turkish-born Duke University professor Abdullah Antepli and Brooklyn-born Israeli author Yossi Klein Halevi, a former adherent of Meir Kahane.
Kahane was the founder of the violent racist Israeli party Kach, which is designated by the US State Department as a foreign terrorist organization.

The idea that MLI and Meir Kahane shared any common ground is laughable, but it shows how Abunimah tries to smear anyone who doesn't share his bigoted, antisemitic views.
(I once linked Abunimah to the neo-Nazi website Stormfront using his exact methodology of smearing his opponents by association.)
Abunimah also goes on a rant against what he calls "faithwashing" - having Jewish and Muslim groups talk to each other to find common ground. Really.
Emgage's main crime, to Abunimah, is that it is not focused like he is on hating Israel. Its issues page talks about oppression of Uyghur and Rohingya and Kashmir Muslims - but not Palestinians (who are living a dream compared to those other groups.) Emgage apparently commissioned a survey of issues most important to Muslim Americans - and, as with Jews who vote Democrat, the Middle East was not a top concern. 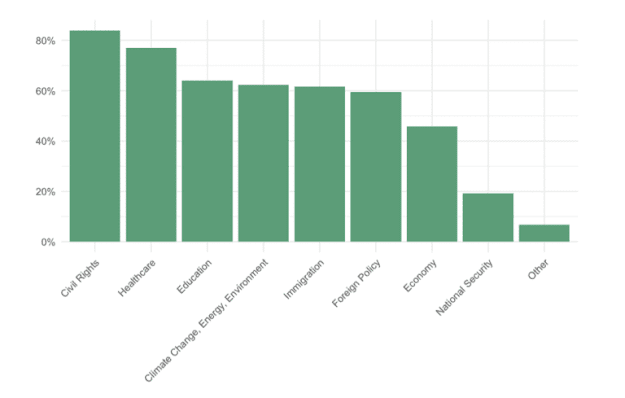 Abunimah's main issue with the group is that these are Muslims who think for themselves, and don't automatically adopt the extremist pro-terror position of the BDS crowd. BDS and haters like Abunimah depend on making the world think that all Muslims are as bigoted and hateful as they are, which gives the impression of widespread support for their anti-Israel positions. Normal Muslim Americans, meanwhile, have other issues that are more important to them.
I'm sure I would have disagreements with Emgage members on Israel and the Middle East. But they seem to be willing to listen and have a conversation, rather than boycotting mainstream Jews as the haters want.
Abunimah's deranged article tells us far more about his unhinged hate than about Emgage.
We have lots of ideas, but we need more resources to be even more effective. Please donate today to help get the message out and to help defend Israel.
Elder of Ziyon at Thursday, September 10, 2020
‹
›
Home
View web version