Last month, the Board of Deputies of British Jews announced an event to be held at the London Central Mosque as an interfaith event in solidarity with the oppressed Uyghur Muslims:

Last week, the BOD issued an update. The event will now be held at the House of Commons, and there will be no representation from the London Central Mosque.

Note the difference is the subheading, from "How can Muslims and Jews unite" to "How can communities unite..."

A group of Muslims wrote a letter to the London Central Mosque urging them not to host the event because the Board of Deputies was too "Zionist."

The letter concluded requesting the mosque to "reconsider its decision to host this event with the Board until such time that the Board distances itself from the Israeli occupation of Palestine and its apartheid policies.”

And the London Central Mosque caved.

This was originally publicized in a British Muslim site called 5pillars. The article itself was taken down, but its editor, Roshan M. Salih, tweeted it: 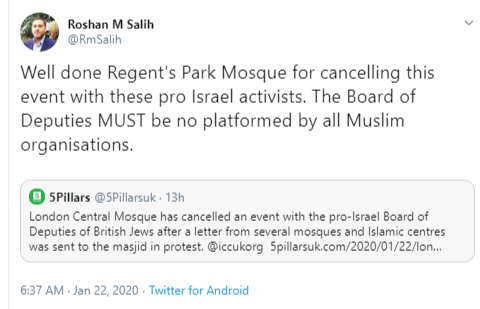 That same 5Pillars site has articles that justify Palestinian attacks on Jewish civilians. Here's one that supports and praises shooting rockets at Israeli Jewish civilians, a war crime by any definition:

Resistance rockets fired from the Gaza Strip provide a necessary counter-discourse. The Israeli Jewish public must understand that there shall be no security so long as they do not turn their anger and frustration at their very supremacist privilege and ideological system which is embodied in the Israeli government, left-wing, centrist, or right-wing.
No one is asking them to leave, but they must accept Palestinian resistance insofar as they accept the arrogance which characterises the Zionist ideology. The radical potential of Palestinian rockets, of sirens going off, lies in these rockets’ ability to disrupt a system of privilege which Israeli Jews enjoy at the expense of colonised and displaced Palestinians.
Rockets, in other words, are a radical declaration of existence and unmediated expression of self-determination.

Only two months ago the same site wrote, "Palestinians have been left with no alternative to resistance, in all its forms," the second phrase meant to include attacks on Jewish women and children.

So it is the height of hypocrisy to say that "no event/organisation/individual should partner with any organisation that is seen as publicly expressing and supporting human rights abuses in other parts of the world" when clearly British Muslim organizations like 5Pillars that explicitly and proudly support terrorism against Israelis would be welcome to any such event.

No, the reason that the London Central Mosque decided to drop the event is because of the unadulterated antisemitism of some British Muslims who essentially threatened the mosque if they go through with it. The London Central Mosque and its director who was to speak knew exactly who the Board of Deputies was when they originally agreed to host the event; it is fear of the Muslim antisemites that caused them to change their minds. They didn't have the moral fiber to stand up to them and say that the symbolism of solidarity with the most prominent Jewish organization in the UK was far more important. Essentially, they threw the Uyghurs under the bus in order to placate Jew-hating British Muslims.

Notice that the Board of Deputies could have cancelled the event altogether after being treated like this by their partners. Instead, they found another prominent venue to push this very important conference. And they are partnering now with the World Uyghur Congress, who understand that some things are more important than anti-Zionist pissing matches.

British Jews actually want to help the Uyghurs; too many British Muslims would rather play politics.

We have lots of ideas, but we need more resources to be even more effective. Please donate today to help get the message out and to help defend Israel.
Elder of Ziyon at Wednesday, January 22, 2020
‹
›
Home
View web version