Omar Shakir proves he has lied about his actions since joining @HRW and does advocate boycotting all of Israel, today

Omar Shakir from Human Rights Watch responded to his critics that wanted him deported from Israel last April:

Israeli authorities say they’re deporting me because I promote boycotts of Israel. Setting aside the paradox of the region’s self-proclaimed “only democracy” deporting a rights defender over peaceful expression, the claim isn’t true.

Human Rights Watch neither supports nor opposes boycotts of Israel, a fact that Israel’s Ministry of Interior acknowledged last year. Rather, we document the practices of businesses in settlements as part of our global efforts to urge companies, governments and other actors to meet their human rights responsibilities. We also defend the right of individuals to support or oppose boycotts peacefully, as a matter of freedom of speech and conscience.

Initially, the Israeli government said it revoked my work visa based on a dossier it compiled on my long-past student-activist days, before I became the Human Rights Watch Israel-Palestine director in October 2016. When we challenged the deportation in court, noting that the Interior Ministry’s own guidelines require support for a boycott to be “active and continuous,” they shifted to highlight Human Rights Watch research on the activities of businesses such as Airbnb and our recommendation that they cease operating in settlements.


His entire argument is that advocating businesses boycott settlements is not a boycott of Israel but a human rights activity against occupation. He says he hasn't advocated boycotting Israel since he was hired by HRW.

His latest tweet shows this to be an absolute lie: 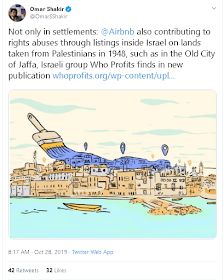 Shakir is now explicitly calling for Airbnb to boycott Israel itself.

By this criterion, Airbnb couldn't operate anywhere in the Western Hemisphere or Australia because all land is "stolen." Is that HRW's position? Or is it, as always, only Israel that has to fit these bizarre and arbitrary criteria to be considered moral enough?

This also shows that the rhetoric against the "occupation" has always been a smokescreen by critics of Israel. They are against Israel, period, and they latch onto the "settlements" as an easier target, but their true aims are shown here.

Including the true aims of Human Rights Watch.


We have lots of ideas, but we need more resources to be even more effective. Please donate today to help get the message out and to help defend Israel.
Elder of Ziyon at Monday, October 28, 2019
‹
›
Home
View web version