Dyke March DC says it is "inclusive" - except for proud Jews 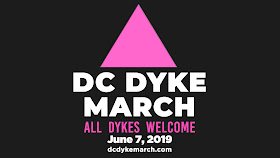 Dyke Marches are community-driven, grassroots, and meant to bring together all who identify as dykes through marching as an act of visibility and protest. It is non-Pride affiliated, with no corporate sponsors, permits, or cops - our goal is to encourage activism within our community and center trans people, queers, lesbians, and other dyke identities who are oft-marginalized by the mainstream LGBTQ movement.

Please bring signs, noise makers, banners, money to donate - this march is not a parade, but a public act of protest & celebration of the diversity of our dyke community.

Invite all the dykes you know! This is an INCLUSIVE space for ALL who identify as dykes. Hatred of any kind will not be tolerated.

But A Wider Bridge reports:

Through inquiries, Dyke March leadership indicated that Israeli flags and related national symbols are not welcome. When pressed about the need to create an inclusive environment for all queer women––including the many Jewish Dykes who wish to carry Jewish pride flags, representing both pieces of their inherent identities, and including the many Jewish and non-Jewish Dykes who consider Israel to be the rightful homeland of the Jewish people­­––organizers declared via Facebook that ‘participants [may] not bring pro-Israel paraphernalia’ including Israeli flags and pride flags with the Star of David on them. When pressed on flags and national symbols from other countries, it became clear Israel had been singled out.

This policy is reminiscent of the controversy surrounding the Chicago Dyke March two years ago, in which three marchers with a Jewish pride flag were asked to leave.

There's a lot of pushback on its Facebook page.

The Dyke March has no problem with Muslims, as it advertised an Iftar dinner for Muslims for Progressive Values last week. But it seems to have a problem with Jews.

We have lots of ideas, but we need more resources to be even more effective. Please donate today to help get the message out and to help defend Israel.
Elder of Ziyon at Thursday, June 06, 2019
‹
›
Home
View web version