SJP literally calls for violence against Zionists on campus

Students for Justice in Palestine are one of the groups that held  a "smash Fascism" rally at the University of Illinois, Urbana-Champaign’  on Tuesday. 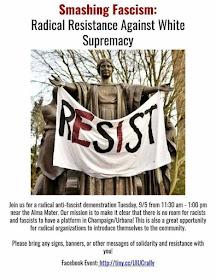 SJP, in its announcements for the rally, explicitly equated fascism and white supremacism with Zionism, and Jewish and Zionist groups raised concerns that a "smashing fascism" rally implied advocating violence against them.

SJP responded to the criticisms by saying, yes, Zionists should be attacked on campus and everywhere else.

Here is their statement:

We, the collective organizers of the “Smashing Fascism: Radical Resistance to White Supremacy” rally, are disgusted with the preemptive backlash our event has received. This opposition highlights the unholy union of American fascists, white supremacists, and Zionists which seeks to weaken and destroy intersectional movements for mass liberation. While we know these criticisms are destructive or rhetorical, we find it necessary to address them and center our narrative.

We are told that all people deserve a right to freedom of speech and expression. We are told that all have equal say in our society. This, obviously, is not the case. The white liberal establishment barely bats an eye when anti-fascist protesters are attacked by Nazis and white supremacists. The establishment is silent when it comes to the murder of black, brown, and Indigenous folks--especially queers of color, women, and femmes. The suppression and blacklisting of Palestinian voices and activism are inevitable results of the pro-Israel status quo in the West. But just as oppressed and marginalized voices are made oppressed and marginalized by unjust systems of governance and societal organization, so too do these forces seek to protect the rights and speech of literal Nazis, of white supremacists all along the political spectrum, and those who seek to implement and continue all manner of ethnic cleansing or indigenous genocide. This speech is not just expression but violence. If given the opportunity, American fascists and white supremacists would complete the settler-colonial project which enabled the founding of this country centuries ago.

We have been attacked for “advocating violence”. Apparently the language of “smashing fascism” has connotations too severe for those who believe that being nice to Nazis may curry their favor. We do not believe there is any other option when it comes to dealing with fascists and white supremacists. Granting them any platform will only lead to further normalization of their violent ideologies. Granted, violent resistance is not always the best option. Nonviolence and peaceful civil disobedience have their places and have achieved great change throughout history. However, violent resistance--whether it is a black bloc or full-scale armed conflict--also has its place. The struggle for liberation must exist on multiple levels and scales--it cannot, and will not, be confined.

...Pro-Israel campus groups have maintained contact with and may have requested an increased presence of campus and area police. This was not at the request of rally organizers and in reality runs counter to our ideals. The police, at all levels, represent white supremacy and the preservation of a racist, classist, and sexist society. Increased levels of policing at events like this present a clear danger to black, brown, poor, and queer and trans members of our community. Such actions show that Zionist campus groups do not have a commitment to fighting for justice and have no problem siding with and introducing oppressive forces within radical spaces.

We will continue to defend our communities and fight for our liberation. Our struggles are linked through shared histories and experiences of oppression. Today’s rally is not a culmination of our activism, but a beginning. We will continue to resist injustices which surround us, whether it be at the hands of the US government or this University. We will fight and we will win, by any means necessary.
In solidarity,

The Co-Organizers and Sponsors of “Smashing Fascism: Radical Resistance to White Supremacy

This is literally a call to attack anyone who is "Zionist" (which, of course, means anyone publicly identifying as a Jew, despite their protestations that they are against anti-semitism.)

This one press release should prompt every campus in the US to ban SJP as well as the other groups that sponsored this event. The alternative is condoning violence against most Jews on campus, wrapped in a robe of righteousness.

I'll leave the last word to a student at Vassar, Jesser Horowitz, who writes:


The left wants to call out other people’s anti-Semitism to make their own movement look better while ignoring their own bigotry. And although I acknowledge that the right is just as guilty, they at least do not have the gall to do so under guise of inclusivity.

We have lots of ideas, but we need more resources to be even more effective. Please donate today to help get the message out and to help defend Israel.
Elder of Ziyon at Thursday, September 07, 2017
‹
›
Home
View web version