Egyptian news site investigates Protocols of Elders of Zion, finds them to be true 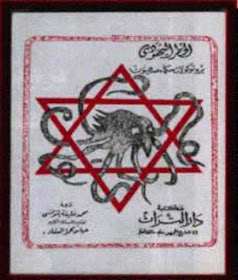 Al Mogaz, an Egyptian news site, has an op-ed by Hisham Lachin titled "The Reality of the Protocols of the Elders of Zion."

It starts off this way:

Nobody knows when exactly conspiracy theories first appeared, or why they were born and what caused their creation, but it is widely believed that there is a direct connection between the appearance of the Protocols of the Elders of Zion which exposed the Global Freemasonry’s plan to promote their rule over the world on the one hand and conspiracy theories on the other hand, after most of what was written in this mysterious book - that is withdrawn from markets after each print in a suspicious way - has become reality.

It reached the point where the Wikipedia entry for the Protocols attempts to stress that the Protocols are a forgery. This is what Abd Al-Wahab Al-Masiri pointed out in the past in an amazing way, and how long is the hand of those who rule the world now, whether we like it or not. It is in keeping with the conspiracy theory that it got to the point where a war was declared against a  TV series which exposed this Jewish Zionist plan, as it happened with Muhammad Subhi in the “A Knight Without a Horse” TV series. We all remember the happenings of that war.

A quick look at some of the contents of the Protocols confirms it is a fact as bright as the sun, and its content demonstrates a lot of what happened in the past or in modern history, including the Arab Spring, which adheres to the first Protocol entitled "Chaos and libertarian revolutions and wars," he stresses the need to exhaust states with internal tremors and civil wars ....to control the world economy.


After many similar "proofs," the author concludes:

These are only some samples from the Zionist Protocols that disappear each time they are printed, and which expose dozens of ruths which were realized or are in the process of becoming reality despite the attempts to deny this. A quick look at our local reality and global reality exposes that this matter (i.e. the Protocols) are not an invention or forgery. Maybe now we will believe that actually there is a council that runs and rules the world, led by a Zionist that we have never known and never will know.

I've discussed this before, but I am still amazed at how many Arabs so eagerly seek out conspiracy theories that give them less responsibility for their actions.

Blaming, of course, the Jews.


We have lots of ideas, but we need more resources to be even more effective. Please donate today to help get the message out and to help defend Israel.
Elder of Ziyon at Wednesday, November 23, 2016
‹
›
Home
View web version