Antisemites like to pretend that kosher certification is a "kosher tax" that hard-working gentiles have to pay against their will for their food to fund nefarious Jewish and Zionist causes.

Ha'aretz apparently does, too.

Israeli hotel rooms are among the more expensive in the world, according to various economic indexes. The first reason is that the cost of living in Israel is sky-high, and the hotels pay about the same for cottage cheese and electricity as everyone else. The second reason is that unlike hotels anywhere else, hotels have to be kosher. And being certified kosher is expensive. 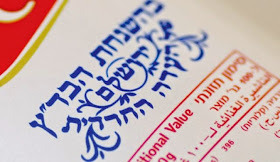 The writer then goes through many of the time consuming kashrut issues, like checking for bugs in leafy vegetables. But these are done by the kosher inspectors, who are paid to be there anyway.

Here are all the costs mentioned in the article:


Aside from the inspector, hotels pay an annual fee for their kashrut stamp of approval. This costs 7,250 shekels (just under $2,000) a year for hotels with more than 250 rooms. Lior Avi, CEO of the Isrotel chain, says the company spends around $3 million shekels a year (some $800,000) on inspectors alone for their 17 hotels, not including the fee.

The only other expense mentioned is that the kosher supervisor brings his family on Shabbat and holidays and they get a free room. At most, this adds about another 50 cents per night per room to the hotels expenses.

The additional sets of dishes and cutlery for dairy and meat are not annual expenses, but there is no way they add more than 20 cents more per room per night if they are replaced every five years. The cost of Passover dishes are certainly paid for by the exorbitant increase in hotel fees during that holiday.

So Ha'aretz is blaming Jewish dietary laws for what would account, at the very most, $2 extra per room per night in hotel expenses.

Now, how much would Israeli hotels lose in business if they decide not to be kosher? A lot more than that.

How is this Ha'aretz article any different from the antisemitic canard of kosher taxes?