David Carr in The New York Times has a go at anti-Israel slander:


Three employees of news organizations were killed in Gaza by Israeli missiles. Rather than suggesting it was a mistake, or denying responsibility, an Israeli Defense Forces spokeswoman, Lt. Col. Avital Leibovich, told The Associated Press, “The targets are people who have relevance to terror activity.”

So it has come to this: killing members of the news media can be justified by a phrase as amorphous as “relevance to terror activity.”

The good news is that, unlike in 2008, foreign correspondents were allowed to enter Gaza and see for themselves. The bad news is that they were entering a place where some journalists already there were considered targets, making a dangerous situation all the more so.

Mahmoud al-Kumi and Hussam Salama worked as cameramen for Al-Aqsa TV, which is run by Hamas and whose reporting frequently reflects that affiliation. They were covering events in central Gaza when a missile struck their car, which, according to Al-Aqsa, was clearly marked with the letters “TV.” (The car just in front of them was carrying a translator and driver for The New York Times, so the execution hit close to our organization.) And Mohamed Abu Aisha, director of the private Al-Quds Educational Radio, was also in a car when it was hit by a missile.

A distinction needs to be made. The battle over ideas — over who owns the truth in a given conflict — should be fought with notebooks and video cameras, not weapons of war.

...The more important principle at work is whether governments in the Middle East and elsewhere will succeed in shaping or silencing different points of view by training missiles and bullets on journalists. If they do, the battle for the truth will disappear into the fog of war.

Carr is making a really sickening assumption: that when the IDF targets so-called "journalists" that they are trying to stifle the free exchange of ideas. It doesn't even cross his mind that the "journalists" themselves are actually militants.

In the case of Mohamed Abu Aisha, he clearly was a uniform-wearing member of Islamic Jihad: 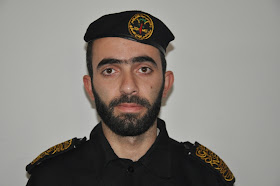 Islamic Jihad doesn't describe him as a journalist, but as an instructor for the Mujahideen of Al-Quds Brigades in Deir al-Balah Battalion Brigade.

Similarly, Hamas message boards refer to Hussam Salama as a "mujahid." That is not a word used to describe civilians.

I can understand how journalists may be sensitive to others who are purportedly of their profession being targeted. But Israel was clearly aiming at terrorists, not at "journalists." Carr's dismissive attitude - and his very biased assumption that the IDF's message really meant that the army was targeting those whose opinions it disagrees with - is quite reprehensible.

It is also notable that Carr, supposedly so sensitive to the safety of journalists, cannot find a bad word to say about terrorist organizations who were clearly using the building housing journalists in order to try to shield themselves from attack. Apparently, that is not worth a comment from this defender of journalists. I wonder why?

It is also important to understand that the broadcasts of terror organizations are not considered protected under international law. As NGO Monitor notes:

Under international law, there is no restriction on targeting communications infrastructure that are part of the “military command and control system” or that because of their “nature, location, purpose or use make an effective contribution to military action and whose partial or total destruction, capture or neutralization, in the circumstances ruling at the time, offers a definite military advantage.” These include “the installations of broadcasting and television stations of fundamental military importance as military objectives.”

In an analogous case, the prosecutor for the International Criminal Tribunal for Yugoslavia found that NATO’s targeting of Serbian Television was legal during the 1999 operation in Kosovo:

Insofar as the attack actually was aimed at disrupting the communications network, it was legally acceptable ... NATO’s targeting of the RTS building for propaganda purposes was an incidental (albeit complementary) aim of its primary goal of disabling the Serbian military command and control system and to destroy the nerve system and apparatus that keeps Milosević in power


Are these media outlets in fact part of the military apparatus of the terror groups? Today, Gaza prime minister Ismail Haniyeh answered this with a resounding "yes," characterizing the Hamas media as "Fedayeen (commandoes) of truth." He never says that he considers them as independent; he considers them soldiers. While this in itself is probably not enough to target the terrorist "reporters" themselves, it shows how Hamas and Islamic Jihad use the profession of journalism as a cover for their own terror aims.

Again, David Carr does not seem to be so bothered by this perversion of the profession he pretends to be defending in this piece.

No, his vitriol is only against the nation who sees through the lies and tries to defend itself from people practicing the war crime of perfidy. It is a shame that this job isn't being done by real journalists who should be spending their time uncovering the truth rather than running interference for those who use their profession so cynically.