Terrorists using machismo to compensate for their fear

Chief Lebanese terrorist Hassan Nasrallah betrays his fears - and overcompensates for them by using bluster and threats:

As reported by Ya Libnan:


Nasrallah warned Israel that any Israeli attack against Lebanon would be met with far-reaching retribution.

“How will Israel, which was shaken by a small number of [Palestinian] rockets, be able to sustain the thousands of rockets that will be launched over Tel Aviv and other cities, in the event of an attack against Lebanon?” Nasrallah asked.

He was referring to the war in Gaza during which Hamas fired hundreds of rockets including the Iranian made al Fajr rockets which reached as far as Jerusalem and Tel Aviv .

But this threat was meant to cover up his fear, as shown elsewhere in his speech:

Hezbollah Secretary General Sayyed Hassan Nasrallah warned the Arab countries during the commemoration of the Shiite holy day, the Day of Ashura , against “befriending” Israel and regarding Iran “as an enemy.” A possible reference to the growing distrust of Iran by the Arab community over its behavior towards the uprising in Bahrain versus the Syrian uprising.

Nasrallah knows that if Syria falls, so does his supply line of missiles and other weapons from Iran. It would also significantly injure Iran's own hegemonic plans, of which Hezbollah is a key component.

If Syria falls, Hezbollah's perceived power in Lebanon would also be greatly diminished.

So, yes, Nasrallah is very nervous.

Similarly, Hamas' reaction to Israel's decision for a cease fire rather than a ground war is nothing more than machismo. Check out this poster on the Al Qassam site: 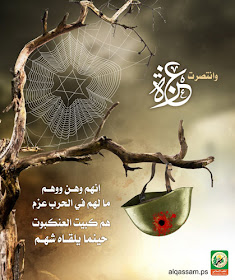 It says "Gaza won! They (the Israelis) are weak and delusional, they don't have resolve in war, they are like a spider web when faced by a gallant/noble(man)."

If you know you won a war, why do you have to work do hard to convince your people that you won the war? It should be pretty obvious, shouldn't it?

The harder Arabs try to appear strong, the weaker they really feel.